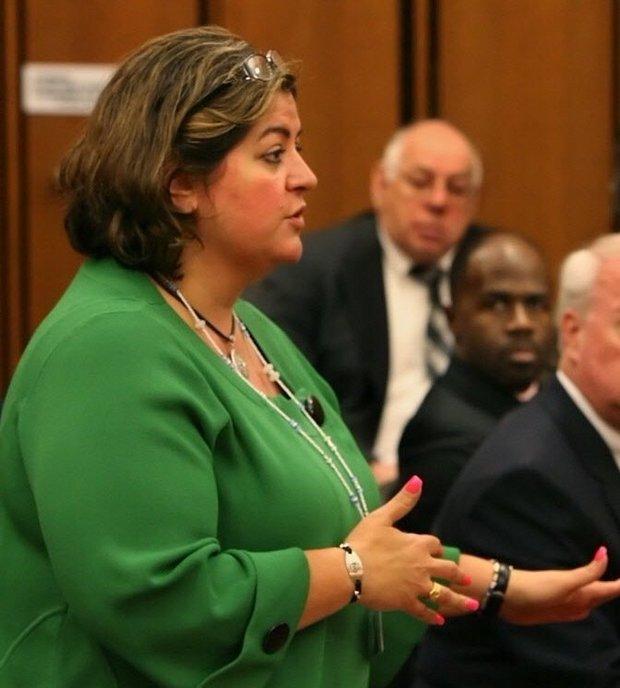 Magistrate Eleanore Hilow, who formerly was a county assistant prosecutor, during a hearing in 2008. Hilow's decisions in custody cases are being questioned by attorneys, child welfare workers and appeal court judges.(Thomas Ondrey)
PrintEmail

By Rachel Dissell, The Plain Dealer
Email the author | Follow on Twitter
on November 03, 2015 at 10:00 AM, updated November 04, 2015 at 7:12 AM
CLEVELAND, Ohio – A Cuyahoga County magistrate who removed a newborn from her parents last month after a mother drank marijuana-based tea for pregnancy pains chronically oversteps her legal authority in child custody cases, according to county children services workers and attorneys.
County attorneys objected to Magistrate Eleanore Hilow's order to take Nova Sanford from her parents after her mother agreed to not use marijuana. Workers found the baby was in no danger living with her parents, Hollie and Daniel Sanford.
Attorney Joseph Jacobs, who represents the family, has asked Hilow's boss, Juvenile Court Judge Thomas O'Malley, to overturn her order. Another hearing in the case is set for December.
Jacobs called Hilow's courtroom "chaotic and tyrannical" and said her "unreasoned, ill-tempered and punitive decisions" were "wreaking havoc on families throughout Cuyahoga County."
A spokeswoman for Children and Family Services said attorneys would appeal the orders in the Sanford case as they've done with numerous decisions Hilow has made that were then approved by O'Malley.
"We are disappointed that this jurist regularly makes rulings disregarding the agency's professional opinion and the opinions of other professionals in the courtroom, including guardians ad litem and other child welfare experts," Mary Louise Madigan, a county spokeswoman said Monday.
A juvenile court spokeswoman said officials declined to comment on the decision in the Sanford case and Madigan's comments about Hilow, who was hired as a magistrate in 2009 after she left the county prosecutor's office.
Several attorneys and guardians ad litem with cases in Hilow's courtroom told the Plain Dealer she often makes unilateral decisions to remove children from parents or caregivers, forcing them into the county's custody without sufficient, or any, evidence being presented during a hearing.
Those decisions are often appealed and overturned.
In one recent appeals case, Hilow had ordered that a child's therapist be removed after she disagreed with her professional testimony that a 12-year-old would be best off with his father, even though the father had been found by police to have marijuana in his home, according to the Ohio 8th District appeals court's decision. The court found that the boy should live with the father and that the therapist should continue to treat him.
In another recent case, an appeals panel found Hilow abused her discretion when she held a county case worker in contempt of court, with a fine of $75 and three days in jail, because a family case plan was filed four days late. The county worker showed she had provided the plan to prosecutors handling the case on time. The court said it was the agency, not the worker, who was legally responsible for filing the plan on time.
In another case, an Ohio 8th District Appeals Court panel said a Hilow decision to ignore a prior appeals court order that a child should live with a grandfather "defies comprehension." The appeals court ordered the Juvenile Court's administrative judge to carry out its order.
Those cases are among at least 10 reviewed by The Plain Dealer in which a higher court reversed Hilow's decisions in the past four years.
The court said in one case that Hilow had "laudable goals" but overstepped her legal authority after she ordered that the county remove three teens from a home if they had "even one unexcused absence or tardy" from school.
Attorneys say she is prone to making her own motions to remove children in custody cases, something other magistrates rarely do. The move often leaves parents and agency workers unprepared for hearings and can infringe on parents' rights if they aren't represented by attorneys.
Daniel Sanford said this week that Hilow took custody of his daughter from him after refusing to continue a hearing so he could get a lawyer. He was told he made too much money to be appointed an attorney, though he was already paying for his wife's legal counsel.
"It's extraordinarily unusual and terribly unfair to change the reason for the hearing," said attorney Daniel Margolis, a veteran juvenile court attorney not involved in any of the appeals cases.
Margolis said a court shouldn't be summarily using its authority to strip parents of custody, especially without all parents represented by attorneys.
"The court is substituting its judgment for the judgment of the professionals," Margolis said.
"Especially when there's nothing terribly troubling in those recommendations when a family appears happy and healthy," he said, referring to the Sanford case.
Posted by Walter Davis at 11:16 PM