Dark Money: How Billionaires Control Our Nation and What We Must Do to Stop Them 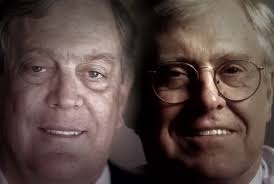 Suddenly, it all makes sense. Why do we have such a dysfunctional government? Why do southerners and poor people seem to vote against their own self interests? Why does congress fail to do the bidding of the majority of the American people?

The answer is Koch Enterprises.

Congressmen have to swear to them that they will not vote on any climate change legisltation that will involve spending money. 153 Congressmen have signed this contract. If they do not tow this line, they will be cut off from funding.

62 of the world's most wealthy people have more money than HALF OF THE WORLD'S POPULATION.

Stop and think about that!

That is why we have CITIZENS UNITED, legislation that makes unlimited bribery legal.

Our courts, legislative branches are bought and paid for as well as many executive level offices.

We are doomed unless we can come up with and sustain a left, right punch where both the left and right comes together and says "We are not going to allow this!"

The Koch's are in total control of the Republican party and they have substantial control of  the Democrats as well.

Their staff and budget is three times the size of the Republican party that they totally control and they invented the Tea Party.

Watch this troubling video to understand the real trouble we are in. WE ARE FUNDING OUR OWN DESTRUCTION...each time we use toilet paper, paper towels, gasoline...(they own the paper companies and developed the process of cracking that is used to make gasoline...each brother pulls in more than $19 Million dollars per day).

Just like the Bush family, there is a long history of treason with this Koch family. Their father aided Hitler, just like the Bushes and had close ties with the Russian Communist party (he developed cracking in Russia)....they are responsible for many of the deaths of U.S. combat soldiers in WWII and subsequent conflicts.

Their objective is to destroy the U.S. government. To paralyze our government and make it so small that corporate entities can operate with no control...hence..small government lie.

This is a big country with a big military...we need a big government to control it AND the wealthy criminals that are trying to wrest away our freedom, unalienable rights and enslave us with debt.

Please watch, please share, please...act. We must come together. We must not allow race, religion, distance, political differences continue to allow us to be separated and ineffective.

Watch the video. It will open eyes. Lets develop a Left/Right punch and put clowns like this...out of business...forever.