Why You Do Not Have a Choice: You MUST Fight Back 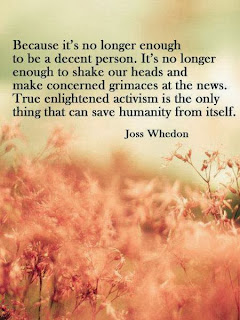 Many of my associates tell me "I am not political." Whether or not you want to face the facts, you are being affected by the political process.

Each time you put the $4.00 per gallon fuel in your car; send a love one off to fight in a war; pay high food prices, you are participating...however passively.

The reality is the rich in this country are NOT GOING TO LET YOU ALONE. You will not have the luxury of just staying at home, watching football and Dancing with the stars. You are being destroyed slowly with the geneticly modified popcorn you are eating.

Your fruits and vegetables coming from other countries with lax environmental regulations are sprayed with pesticides that will later destroy your pancreas, liver and intestines...if you do not start detoxing...and fighting the wealthy class that simply wants to destroy your family and livelyhood in the name of profit.

They say "We do not need big government".....try having a small government and the BIG Army and Navy that we have.

The truth is, wealthy people do not want or need big government. They can afford healthcare, private jets, fuel, good food, shelter. It is the poor and middle class that needs big government to PROTECT US FROM THE WEALTHY.

Free enterprise's ultimate solution is...slavery...slavery means no cost for labor and VERY high profits...that is what the free market does. This is why GOVERNMENT stopped child labor and 12 hour days...enforced safety in the work place, in cars...the wealthy do not like BEING TOLD WHAT TO DO...so...they have convinced poor folks who are ignorant about history to take their side and DIE for them ...much like the poor Confederates who did not own slaves...died to preserve slavery.

We must bring forth ALL issues no matter how sensitive so that at the end of debate, we emerge stronger.

As long a injustice festers in this world, none of us can truly rest.

The brave man and woman is not the one who reveals and absence of fear...but is one who conquers and manages fear.

We must not be defeated by the promoters of hate, fear and complacency (FIXED NEWS....LAME STREAM MEDIA, TEA BAGGERS, ANTI MUSLIMS, ANTI PEOPLE OF COLOR, ANTI WHITES....ON AND ON...).

We must stand up leaders who will not sell us out like Obama (the bankster bailout)...Clinton (Glass Stigel Act...allows speculation with our funds...NAFTA, CAFTA..destroyed economies in South America), George W. Bush....(lied about weapons of mass destruction, entered false flag attack wars...long history of Bush family treason...Prescott Bush supporting the Nazis in WWII, confiscation and destruction of all electric cars in California 2006..on and on), Ronald Reagan...destroyed protections for consumers...took solar panels off of the White House, help Sadam Hussein, Armed the Contras, killed millions in Central and South America....squandered peace with Russians...on and on), ...both Democrats and Republicans have destroyed our dignity...our standing...our respect...worldwide as responsible world citizens.

We have poverty on one side...affluence on the other...we have a Fiat government...one controlled by the wealthy.

When you understand this..you can be liberated.

There are six stages to a declining empire and we are in the last one:

We have an overextended, undisciplined military (have you seen how many generals and admirals have been sacked recently)

We have a conspicuous display of wealth, A massive disparity between rich and poor. A desire to live off a bloated state. and Obsession with sex, ...the debasement of currency. Those of us who study history, know...these were the same things that the Great African Empires suffered, Romans, Hittites, England...on and on.

When PLUNDER becomes a way of life for a group of men living together in a society, they create for themselves in the course of time a legal system that authorizes it and a moral code that glorifies it.

That is why the CEO of Walmart makes $11,000 per hour and argues against paying a living wage to workers....why the Koch brothers make $19 million per day...why 32,000 children die each day...and social security benefits are being cut for the elderly...

This is why you have NO CHOICE but to stand up. They will come and get you sooner or later.

Ask the Polish people who stood by while the Polish Jews were being rounded up by Nazis and killed...they eventually came and killed them too.

I am asking you to make a non-violent stand.

I am asking you to document injustice and speak out.

I am asking you to join me in a public information campaign where we document injustice and blast the stories out via social media, Internet Radio and TV.

Stand with me to combat injustice no matter where it is found.

We Powerful tools! Lets bring these criminals up on charges.

Email your stories to info1656.DemandJustice@blogger.com

Join me for regular radio broadcasts on http://www.blogtalkradio.com/sdcommunitycoalition

Get your own Internet TV channel and help us with funding, by purchasing services here http://www.comf5.com/videoconsulant
Join me for regular broadcasts.

See these web sites for tools.

Email ThisBlogThis!Share to TwitterShare to FacebookShare to Pinterest
Labels: 1Why You Should Join Us, Unity