Thousands Are Having Shock Treatment For Breakfast #FDAStopTheShockDevice

If the FDA is successful with its new proposed rule that is open for public comment, shock treatment will soar.

Sign the petition to tell the FDA they must hold hearings about the down-classification of the shock device and that the shock device must not be lowered to a Class II device for any reason. 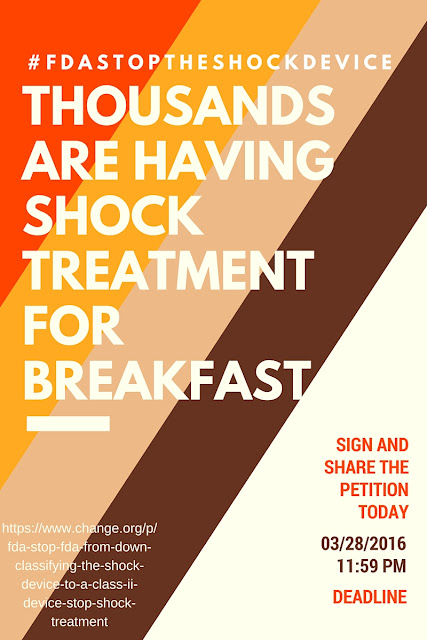 Sue Clark-Wittenburg (1955 - 2015), 2015 shared her experiences on Talk with Tenney and reminds me and everyone else to keep focused. Shock treatment is torture.

Sue through her work in organizing the International Campaign to Ban Electroshock would be working to stop the FDA from its current shady proposed rule to down-classify the shock device from a Class III experimental device to a Class II device, putting the machine used to generate the shock in shock treatment in the same category as eyeglasses or a wheel chair.

The FDAs proposed rule allows that shock treatment is 'safe enough' for people who experience a "depressive episode" as part of "major depressive disorder" or "bipolar disorder" and who are "treatment-resistant" because you 'failed' neuroleptic or psychotropic drugs, or "require rapid response".

In the Talk with Tenney episode that this excerpt of Sue is taken from, Electroshock: A Crime Against Humanity, Sue explains that when she was a teenager, she was shocked, and that the last shock treatment she had stopped her heart.

Sue is not physically here to lead the fight, but her memory persists and what happened to Sue, and millions like her, will not be in vein.


In Loving Memory of Sue Clark-Wittenberg from Lauren Tenney on Vimeo.